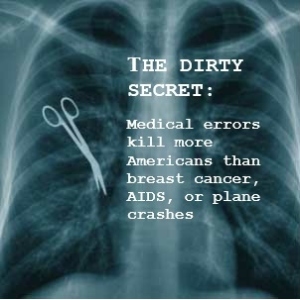 According to the Subcommittee on Primary Health and Aging in a July 2014 hearing, “preventable medical errors persist as the No. 3 killer in the U.S. – third only to heart disease and cancer – claiming the lives of some 400,000 people each year.”  This amounts to 1,000 people each day.  Not only is this a gross loss of life, but an expensive one, costing the nation $1 trillion a year.

However, there is hope with reform.  The 2010 Affordable Care Act penalizes hospitals if their patients come back within 30 days of their initial visit for problems associated with treatment and specifically for such things as infections acquired while hospitalized. Indeed, under the ACA hospitals will lose as much as 3% of their Medicare revenue on high readmission rates.

If you think you or a loved one are the victim of a medical error, contact Walsh Woodard LLC for a free consultation at (860) 785-2011.  We are here to help.