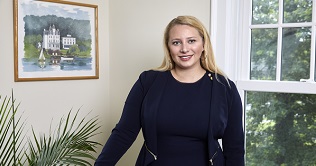 Ms. Malcynsky has been published by The Forum trial advocacy magazine, the Hartford Courant and in several online publications.  She has been featured as a speaker on trial advocacy and leadership at numerous conferences and by webinar, including programs on Closing Arguments and Damages, Conducting Expert Witness Depositions, the Federal Rules of Evidence, Evidentiary Objections at Trial, Focusing Cross Examination, Premises Liability Cases, Trucking Litigation, Social Media in Civil Litigation, Appellate Advocacy, Women in Law and Leadership and New York Women in Law and Politics.  Ms. Malcynsky has also contributed more than 3,500 hours of pro bono legal work in Connecticut.

Ms. Malcynsky received her undergraduate degree with honors from Columbia University, where she majored in Political Science and History and completed studies on executive leadership, foreign intelligence operations and counter-terrorism.  Prior to law school, Ms. Malcynsky served as Regional Finance Director for Governor Mitt Romney’s 2012 presidential campaign, and worked in development and strategy in both the political and non-profit spheres.

Ms. Malcynsky graduated early from the University of Connecticut School of Law, where she received multiple awards for excellence in Trial Advocacy, Constitutional Law, Asylum and Human Rights Law, and Legal Spanish. Ms. Malcynsky competed for and served as President of the UConn Mock Trial Society during her tenure at UConn, and now serves as an advisor and coach for the law school trial advocacy competition teams.  She completed clinical work in criminal law with the State’s Attorney’s Office and asylum law with the UConn Asylum and Human Rights Clinic.   Ms. Malcynsky also worked closely with faculty of Yale, University of Connecticut and Quinnipiac law schools, state legislators, members of the judiciary and members of the Connecticut bar as part of the Task Force for Access to Justice in Civil Matters created by the Senate Judicial Committee.

Ms. Malcynsky is a Connecticut native and resides in West Hartford.